Venice Rookery at the Crack of Dawn

Dawn was still well off when we arrived this March morning. I was with a small group of photographers led by Artie Morris. Tripods, flashes, and humans lined up along the shore of their pond in the darkish pre-dawn... which could have been an eerie spectacle for the birds on the island - except that it undoubtedly happened every few days during the nesting season. They were unperturbed. 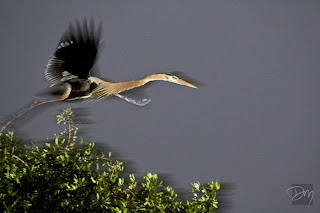 Not sure what to do with so little light, I was winging it, so to speak, when I made my first keeper that morning... a nice flash blur of a great blue taking off. The birds had become increasingly active as the light crept in. Several pairs of Great Blue Herons shared this small island in the small lake in the county park in Venice. We watched as the males fetched sticks for the females who constructed the nests. There were awkward moments of handing off sticks, bill to bill, and funny ones, when an incoming bird annoyed a neighbor. Sometimes the builder would find a given stick unacceptable, but most of the time she accepted it with grace and intention.
Back and forth the birds went, offering ideal photo ops for the gawking humans... hey, how about a little privacy?! 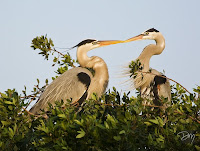 These regal birds would soon be laying eggs, and with some luck, raise a small brood of not-so-regal-looking young'uns. Here are some of the more-like-dinosaur-babies from a previous season.
This was our first outing as a group... and Artie meant to keep us going from 5 am until 9+ pm every day of the workshop, mostly teaching on the fly, so to speak. It was a pretty amazing trip to SW Florida!

Posted by David Moynahan at 3:37 PM No comments: