Click on an image/caption for a larger version, then use your Back button to return to this blog.  Enjoy. 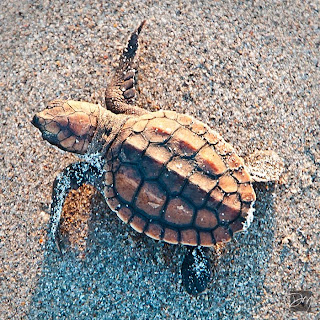 Little Loggerhead Sea Turtle
Walking along the Atlantic coast in Cocoa Beach a few days ago, I encountered a seagull standing in shallow water holding an odd looking crab in its bill.  In a moment, I recognized that the crab was a sea turtle hatchling.  Reflexly, I splashed toward the gull waving my hands, scaring it into the air.  My heart sank as it flew away with its prey.  BUT, in its hurry, it lost its grip and dropped the youngster into the shallows.  The gull and I both swooped for it. I won... and to my amazement held a tiny loggerhead sea turtle in my hands.  She appeared dead but without visible damage so I sat on the beach, cradled her in my palms, blew air on her and pleaded softly for her to revive.  The sun was rising over the Atlantic horizon. 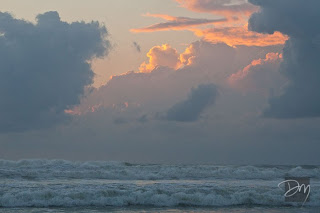 My imagination ran through what this little creature must have endured since digging out of her sandy nest sometime in the previous night.  Just crossing the beach is treacherous.

I once watched (from too far away) as a Great Blue Heron ate nearly every baby sea turtle in the nest as they came up out of the sand.  I ran, but by the time I got there, only one baby remained. 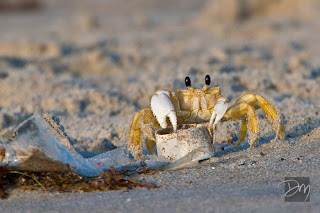 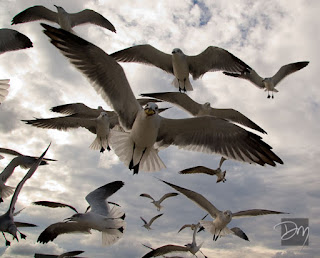 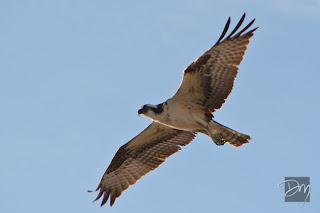 Lights from the condos, hotels and roads disorient turtle hatchlings and account for many deaths - the little ones stray up onto roads and yards where they dehydrate and die, are eaten or run over.  There are lights-out laws, but they are rarely enforced.

Only one in a thousand makes it to adulthood.
(Check out http://research.myfwc.com/support/view_faqs.asp?id=16)


Hurricane Igor, way out near Bermuda, was sending big waves to this coast on this morning.  If the surfers had to fight their way beyond the break, how could a tiny floating sea turtle make it?  It was clearly a tough day to be born.

Then there was a wiggle, soon followed by flapping flippers.  The little loggerhead looked up at me.  I  set her gently on the sand and photographed her second journey to the sea.  Tired and timid at first, the tot got her rhythm and soon was running the gauntlet.


It was a thrill to see her launch into the shallow Atlantic wash, but then the first little shorebreak rolled up and dashed the turtle about before spitting her back onto the beach.  Looking defeated, she sat there for a bit, then tried again.  I imagined once more, the little turtle dodging crabs, being ejected time and again by the raging waves, and finally being snatched up by the sea gull.  Determined to give this one a better chance, I stripped to my bathing suit, scooped up the little loggerhead once more, and swam her out beyond the furthest break.  Now, I thought, all she has to do is cross a few miles of wild Atlantic waters to the relative safety and rich food supply of the weed line at the edge of  the Gulfstream.  I like to think she made it. 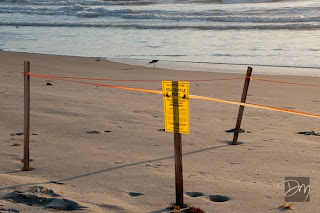 Over the next few mornings, I saw no more sea turtles... it is late in the hatching season.  There was one unhatched nest (too close to the water). But I did see birds and people and artsy angles on lovely sunrises. 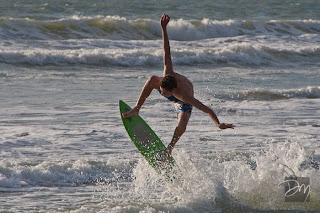 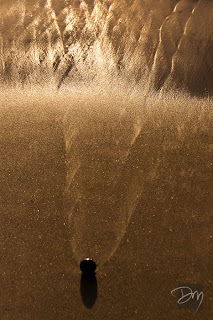 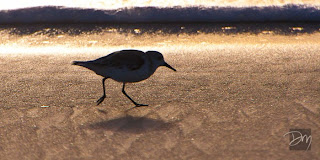 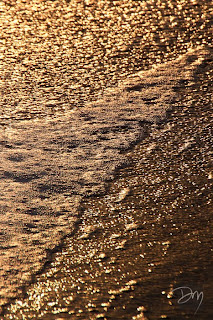 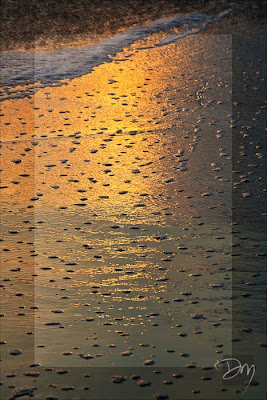